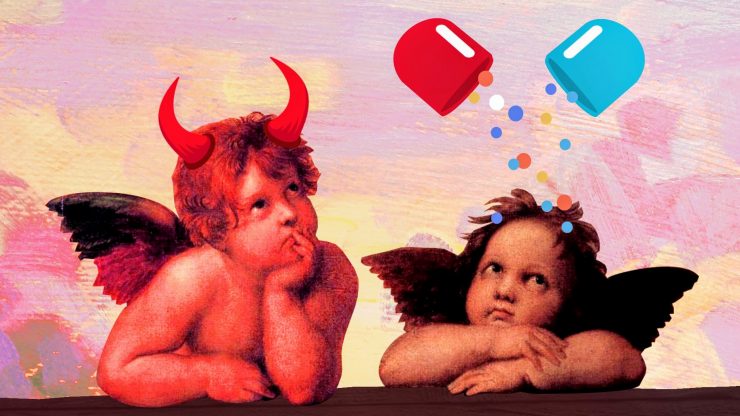 The Good, the Bad and the Pill

These thoughts are meant as a reaction to an article published in the NYT entitled “Are we ready for a morality pill?”.

Ask anyone around you: “Would you be willing to take a morality pill? One that would somehow make you more inclined to empathy, or reduce any inclination towards aggressivity you might have?”. One thing is certain: you will be met with alarming speeches stressing the dangers of such a totalitarian proposal and resorting to the darkest hours of the 20th century to prove that any attempt to create a new and better man can only head for disaster. The notion that we would be genetically (morality pill is to be understood as a metaphor) or biochemically modified in a way which would reshape our entire personality – and thus our entire lives – would undoubtedly be perceived as an infringement of individual liberties of the worst kind: an attack on our very freedom to think. Not on our right to voice or even have an opinion, but on what goes on directly inside our heads.

Yet that first reaction is hardly reasonable. First because a morality pill would not amount to a mind control of some sort. Science can only go so far as to change the biochemical processes which occur within our brains; a morality pill would therefore merely affect the incentives one receives to either act and help one’s neighbour or look the other way. Which means you would still be free. Our ability not to abide by the stimuli generated by our brains, i.e. the fact that our actions cannot be accounted for by a mechanical causality – that is by a sollicitation-reaction pattern or a reflex – is at the core of what makes us human. A starving man can stand in front of a pile of his favorite food and not eat it; a dog can’t. If it does, it means it will have been trained not to – in other words its brain will have substituted one signal with another: hunger by fear of punishment. So being faced with an injured little girl lying on the side of the road, you would still be left with the choice to act. It would only cause you greater discomfort not to. (see Are we ready for a morality pill?, Peter Singer, NYT).

That does not settle the debate though. A mandatory “morality pill” may not deprive you of your free will, but it would still require granting the state full authority to modify, say, hormone production in your body. Which appears to be yet another violation of our freedom… One may wonder: how is that infringing on our freedom, given that none of us ever got to choose our predisposition to empathy in the first place? After all, assuming your parents don’t have religious beliefs and the required “surgery” (whatever form it may take, genetic engineering for example) is performed at birth, you would just be replacing the arbitrariness of nature by a political decision. And retrospectively, who would say they wished they cared less about other people? Who could argue they would have been better off being more selfish?

Well I think I can. Let us leave aside the sickening level of paternalism that comes with such a proposal – aren’t we supposed to be living in a liberal society, the founding principle of which is that there should be no legally binding conception of morality (cf. John Rawls, A Theory of Justice)?. I think the most decisive argument against a morality pill, surgery or else is that we cannot seriously assume that our brain is segmented in such a way that one could monitor our propensity to feel empathy without affecting any other aspect of our personality. What if a strong inclination towards empathy necessarily came not only with a high readiness to help others, but with an equally high resentment for confrontation? Not everything that gets out of confrontation is bad. Take philosophy for example. Dialog – the confrontation of ideas – has been at the core of philosophical advances since Socrates himself. Philosophy is a perpetual demand for justification, thorough examination and ceaseless questioning. How good is an idea that can never be challenged? How can it be improved?

And it’s not only fear of confrontation and philosophy; a stronger level of empathy may very well have way more pragmatic consequences: it could prevent you from taking individual initiatives, or engaging in a competitive environment, thus hampering the efficiency of our research, our politics, our economy… Surgeons may find themselves unable to perform their duties out of fear they might fail and ultimately cause pain to their patients. Besides, what scientists define as empathy may very well be embedded in a broader form of sensibility which applies to you as well. You could find yourself having more trouble taking risks, or be left with a little less willpower, a tendency to portray yourself as a victim etc.

Finally, I want to point out that the very idea that we would need a pill to make us act morally is both deeply disappointing and somewhat deceitful. Morals is not about doing the right thing, but rather about doing the right thing for the right reason. Acting in compliance with what you know to be right can only be qualified as moral if you do it because you know your acting that way is the right thing to do (Kant, Fondements de la métaphysique des moeurs); helping your neighbour because it would be hard on you not to is hardly moral based on this premise. But we’re talking politics here, not morals. So it doesn’t really matter, does it?

Thanks to Thibault and Damien for their proofreading.