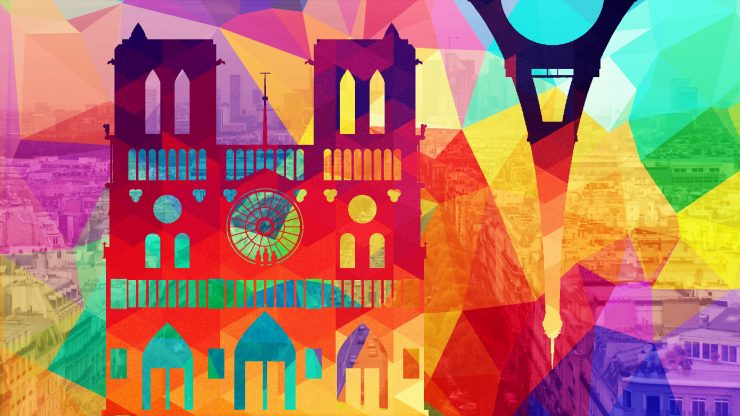 A scaffolding, a garden hose, and an inflatable swimming pool. Believe it or not, this is an artwork displayed during the 2016 Foire Internationale de l’Art Contemporain (FIAC or International Art Fair in English). Described in such a way, it does sound ridiculous. As a matter of fact, Parisians easily make fun of such bizarre constructions. But despite this more than tepid reaction on their part, Paris stands today as the world capital for contemporary art.

According to a study published in 2010, one out of every three Parisians claimed to be totally indifferent to contemporary artwork, while one out of six thought the price of such artwork to be outrageous (considering what was estimated to be the amount of work put into it by the artist). Unfortunately, no other more recent study is available, but one can safely assume that their mindset hasn’t changed much. Foreigners believe Parisians to be narrow-minded, contemptuous and whiny. One simply needs to visit the Tuileries in October of every year to realise only tourists gaze at the artworks and take pictures of the FIAC’s “hors les murs” (a program to display artworks in public spaces). Of course, not all Parisians are like this, but gallery owners agree: French buyers are a rare sight on the market for contemporary art. Emmanuel Perrotin, a renowned gallery owner and star of the 2017 FIAC following the display of an artwork by Japanese artist Murakami at his stand, complained in 2014 that French buyers only represented 10% of his yearly sales.

But how does a city end up on top without backing from its citizens? Thank the FIAC for that. Launched in 1974, it was meant to house a few enthusiastic collectors in the former Bastille train station (there were only 110 exhibitors at first). Now, there are 75000 visitors from around 60 different countries and almost 200 galleries represented at the Grand Palais every year. In addition, the event takes control of a number of other locations for its “hors les murs” showings (in places such as le Petit Palais, les Tuileries, la Place Vendôme). Indisputably, the FIAC shines bright on a global scale. In October 2015, gallerist Kamel Mennour told Le Point: “In China, every collector I met mentioned the FIAC”. The frenzy is such that the Grand Palais decided to conduct renovation work to improve space management starting 2020, so that it can continue to welcome the FIAC in the future. In 2003, people feared that the opening of the London Frieze, a comparable event, might stifle the fledgling FIAC. They were wrong: today both events are at par in terms of visitors. If the FIAC has done much for Paris’s prestige in the art market, there are other factors to Paris’s success. Last September, the prestigious New York MoMa (Museum of Modern Art) chose the Louis Vuitton foundation (located in the west of Paris) to host its unique modern and contemporary artworks while it undergoes renovation.

In fact, Paris doesn’t need Parisians to work wonders on the contemporary art market. It’s a bit like tourism in general. It’s a well-known fact that the Eiffel tower isn’t made for Parisians, 90% of whom have never even climbed it. It is all about promoting a certain image for the rest of the world, the idea of a city of glamour, a symbol of love and refined taste. To that extent, the FIAC has outdone itself in its objective of wooing foreign visitors. Hard bargaining and generous investments allow the FIAC to dazzle the public with ever more impressive artworks: last year the Grand Palais exhibited Duane Hanson (author of The Supermarket Lady), the Petit Palais did the same with Marcel Duchamp and Damien Hirst (the former has been no less than the harbinger of contemporary art with his urinal Fountain; the latter is one of the most renowned artists today). This year, visitors could admire the works of Niki de Saint Phalle, Murakami and Daniel Buren. A mere hint at the arrival of an artwork is all it takes the FIAC organisers to send prices through the roof.

In the end, Austrian art merchant Thaddaeus Ropac (owner of the prestigious Pantin gallery, in the north of Paris) accurately sums up the situation: “not a day goes by where we don’t welcome a foreign visitor”. Now that Paris dominates the contemporary art market, it should easily maintain its rank, thanks to its attractiveness on an international scale…and never mind the Parisians.