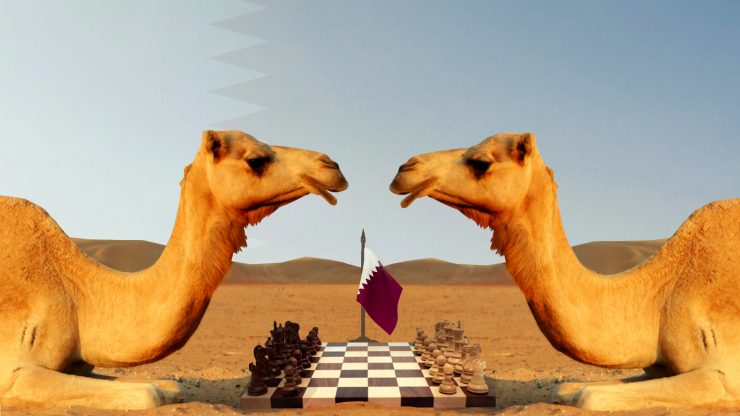 Why Qatar is still suffering from an embargo

“A return to the dark age of tribes”: this is how the Qatari foreign affairs minister, Mohammed bin Abdulrahman Al Thani, qualified on Tuesday, October 17th the government destabilization strategy that Saudi Arabia, relying on its ties with tribes located in Qatar, is supposedly staging. And one must admit that the relations between the two countries have turned sour since the embargo began on June 5th, 2017, and that the skies of the Persian Gulf are darkening.

Of course, the relationship between Qatar and Saudi Arabia has always been complicated. In 1971, when Qatar became independent from the United Kingdom, it refused to join Saudi Arabia – while it is, as everyone knows, a peninsula that could easily be hung back to the mainland, and not an archipelago like Bahrain. The Emirate knows indeed that it has the means to support its independence: Saudi Arabia may be the leading oil producer, but Qatar controls one of the largest gas deposits worldwide, North Dome, along with Iran across the Persian Gulf. Qatar thus assumes the role it is entitled to within the Gulf Cooperation Council, which was founded in 1981 and gathers the six Arabic and Muslim monarchies of the Persian Gulf. It does not hesitate to contest its Saudi neighbor, irritating its pride and questioning its regional tutelary ambitions.

Hence, Qatar has a policy of its own, even though it may clash against the Saudi one. For instance, the country supported some revolutionary movements such as the Muslim Brotherhood during the Arab Spring in 2011, a stance that opposes directly Saudi Arabia’s. The latter indeed sought to keep the region stable, and, for that purpose, supported the Egyptian army, and backed its fellow Islamic monarchies in the Arabian peninsula, in Jordan, and in Morocco. Let us recall that Doha-backed Qatari news channel Al-Jazeera played a key role in spreading revolutionary fervor throughout the Arab world, to the immense displeasure of Saudi Arabia that cannot stand the liberties said fervor advocated for. But the key issue lies in Qatar’s discordant policy regarding Iran. Indeed, Saudi Arabia is entrenched in a Cold War with Tehran which is based on the split between Sunnism and Shiism; however, Sunni Qatar leads a conciliatory policy, advocating for the opening of a dialogue with Iran based on non-intervention in foreign affairs and refusing to spread Iran’s revolutionary ideology.

Those are the two reasons why the crisis between Qatar and Saudi Arabia (followed by its three allies, Bahrain, the United Arab Emirates, and Egypt) sparked off in June. The Saudi excuse for this is that Qatar backs Islamic terrorist groups – which is not wrong, even though seeing Saudi Arabia chide Qatar over this is quite amusing – but in reality this crisis sprang from the improving relationship between Qatar and Iran and the Saudi intent of benching a rival that was beginning to overshadow Arabia. PSG and BeIn Sports are Qatari companies, and the reconciliation between Qatar and Western countries such as France, that sold 15 Rafales to Doha in December 2015, displeases Saudi Arabia, that seeks to be the only leader of the Sunni group.

Thus the beginning of the crisis on June 5 is a consequence of a slightly questionable interview that Emir Al-Thani has supposedly given, during which he would have highlighted a misguided, antagonistic diplomacy with Iran, and expressed his support for the Hamas. The authenticity of this interview is contested by Doha, which claims to be the victim of a hack; whatever the case, it sprang an unprecedented crisis that has yielded an aerial embargo, as Qatari planes cannot fly over countries enlisted against him (Saudi Arabia, the United Arab Emirates, Egypt, and then Yemen, the Maldives, and Libya); maritime relations have ceased; the land border with Saudi Arabia is closed, which, by the way, displeases a number of Saudi that had a habit of crossing the border to spend the week-end in hotels that serve alcohol.

As its Finance Minister has pointed out, Qatar is no longer a peninsula but an island.

This embargo has had serious consequences for the country, in several different fields. First of all, supply has been directly impacted. Qatar isn’t known for its fertile crops and, before the crisis, over 90% of its food supply came through the land border. Air supply routes have been created with its new Iranian and Turkish allies, and today enable feeding 2.7 million Qatari citizens; but this situation cannot last. This supply shortage also affects the other sectors of the economy, such as construction, which pains Doha as it is about to host the 2022 Football World Cup (which, by the way, frustrates its Saudi neighbor considerably). Lastly, and this is the point Qatar relies on to make the embargo end, it affects the supply of military bases in Qatar, and, amongst them, the American base of Al-Udeid, a key element in the fight against ISIS.

The other consequences on the economy have had a limited impact. Qatar remains the world’s top liquefied natural gas (LNG) exporter. Financial markets, after tottering at the beginning of the embargo, went back up. Doha acquires their trust by repatriating foreign funds, especially through QIA (Qatar Investment Authority), its sovereign fund. Also, according to Moody’s, Doha would have invested $38.5B in the Qatari economy since the crisis started.

But such a situation obviously cannot last: the Qatari economy would deeply suffer from a lasting embargo, and the United States cannot allow two of its allies, to whom it often reiterates its support, to quarrel with each other while the Islamic State continues to exist. Thus, the American stance is that of dialogue: Donald Trump regularly discusses matters with the Qatari Emir and the Saudi King. Let us point out that, in that sheik game, everyone praises dialogue and its failure is blatant.

So what happens now?

Disputes between Qatar and Saudi Arabia will not be settled overnight. In fact, in 2014, a crisis had already opposed the Gulf Cooperation Council and Qatar; Saudi Arabia, the United Arab Emirates and Bahrain had withdrawn their embassies from Doha, for that same support of the Muslim Brotherhood and other extremist movements. It seems hard to quickly settle diplomatic disagreements over which the two opponents clash – for they are indeed opponents, even if diplomacy would not have that term used.

Yet, the extreme stances that this last set of events triggered lead to the belief that only one of the parties submitting, or a foreign power intervening, can possibly settle the conflict. If, once, talks had seemed to be the way out, with the thirteen Saudi demands becoming “only” six slightly vaguer principles on July 20th, negotiations ceased when Qatar refused to give up on policies it considered part of its national sovereignty. As such, Qatar did not hesitate to strengthen its relationship with Iran, by reopening its embassy in Tehran on August 24th – which it had closed in 2016, to support Saudi Arabia, after its embassy was attacked – which was of course ill received. It also declared it would not back down on its support to Al Jazeera, a true means of foreign influence for Doha, while its opponents demand so – especially ever-so-democratic Egypt, which wants its political prisoners to remain silent.

Observers are talking about a possible war, about Qatar getting invaded by its neighbors. Although this possibility remains unlikely, it is undoubtedly discussed in high places, and it would undoubtedly spark off a regional conflict that could include Iran and even Turkey. The antipathy between both parties is such that, despite hopeful speeches, talks are non-existent. And this is undoubtedly where Donald Trump’s administration could play a decisive role. But the unwillingness and uncertainty that tend to characterize the Trump foreign policy cannot let us infer anything. In fact, when asked whether he had opposed his Saudi friends’ invasion of Qatar, Mr. Trump answered in a press conference – with the Qatari Emir! – With a lazy “No.”

The crisis between these old rivals, Qatar and Saudi Arabia, must of course be questioned using history – even though the current uncertainty is worrying, as parties keep getting bolder and international mediation keeps getting scarcer. Hence, Saudi sheiks will not be delighting themselves in Qatari hotels anytime soon, to their great despair.