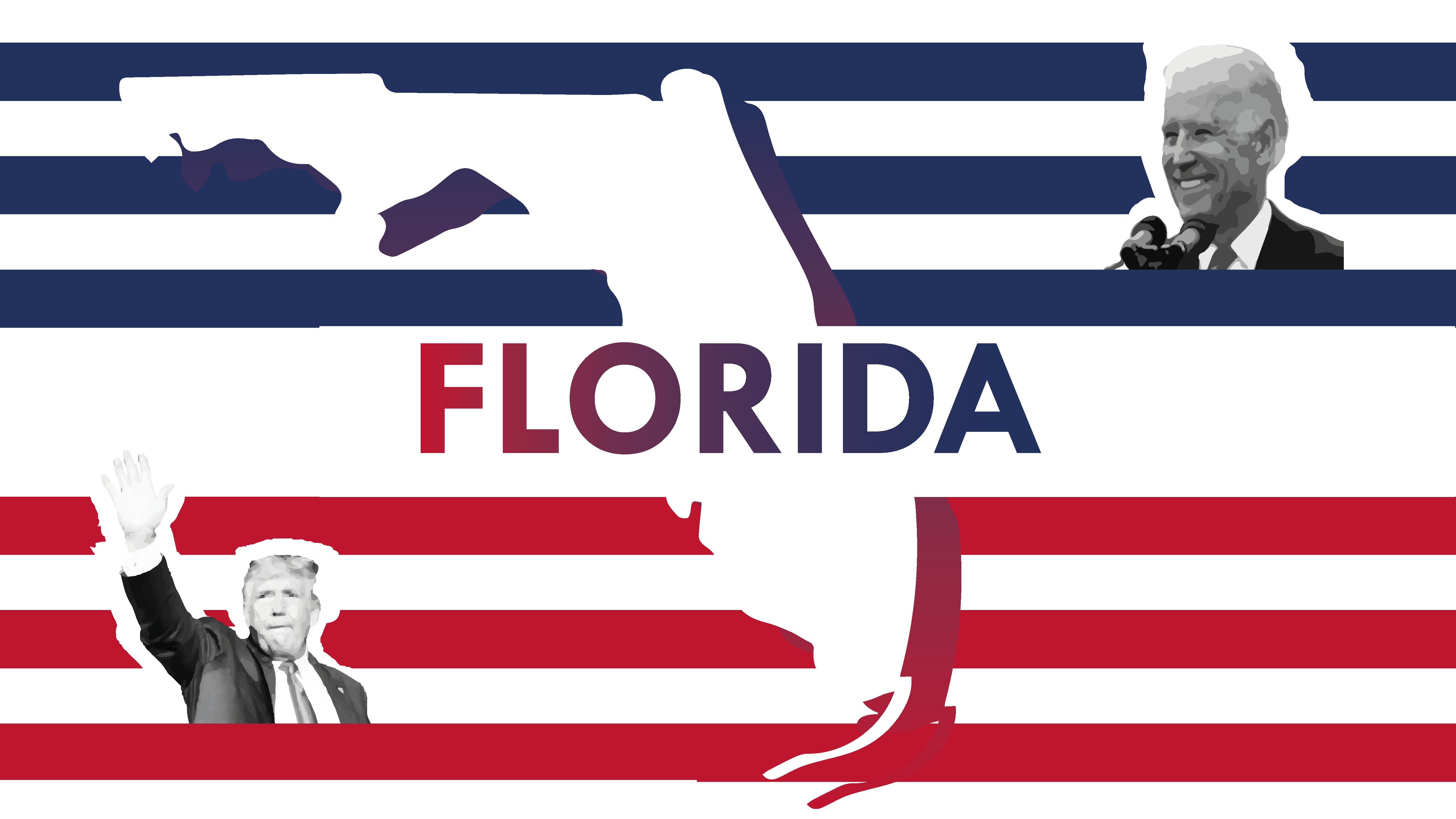 Florida : duel under the palm trees

Those who lived it will surely remember the stifling and chaotic electoral evening of November 2000, during which a few hundreds of votes in Florida were supposed to decide the outcome of the election opposing Al Gore to George W. Bush1In one of the biggest power grabs in the American constitutional history, the US Supreme Court had claimed for itself the status of electoral judge for federal elections, at the expense of local courts. Twenty years later, such a scenario is still on the table, as the electoral rules that made it possible stayed pretty much the same and the gap between the two candidates is infinitesimal in the Sunshine State. The massive use of postal voting will not fail to raise questions – of debatable legitimacy – on the integrity of the electoral process, all the more because these ballots will be counted afterwards. In Miami, the atmosphere promises to be electric…

And yet Florida has not always been the swing state on which American political scientists debate all day long. As it joined the Union in 1845, it was (and still is to this day) a swampy ground with a frightening fauna. Ripped from the Spanish-speaking world, whose orbit it is now entering again, it slowly built its wealth on plantation economy. Its demographic weight did not amount to much compared to the other states; it used to be represented by only 3 votes in the US Electoral College, namely 0.5% of the latter. However, Florida has been gaining power ever since the 1960s thanks to tourism revenues, new industries and immigration, making its number of electoral votes increase ten-fold to reach 29, i.e. 5%, seats. Its gradual de-industrialization as well as its economic and cultural bridge with Latin America made Florida what it is today. In this historically conservative state, Democrats and Republicans remain head to head. Winning over Florida would provide Biden with a comfortable margin of 29 electoral votes, which would give him a total of 261 out of 270 Electoral College seats when added to the states Hillary Clinton won over in 2016. Conversely, according to the present forecasts2https://www.270towin.com/maps/consensus-2020-electoral-map-forecast, it is very unlikely that Donald Trump will win the election without the votes of the Sunshine State. In short, as for every election since 1964 (!), the candidate who will win over Florida has every chance to become the next White House occupant.

Most of the time, the election results in Florida are determined by the allegiance of the Spanish-American community, who can be fickle and does not necessarily side with the Democratic Party. In this respect, choosing Kamala Harris as vice-president candidate was anything but innocuous. Yet estimations in September still gave Trump and Biden 50% of Latinos voters each3https://www.nytimes.com/2020/09/12/us/politics/trump-scandals-woodward-midwest.htm; a distribution that reflects the conservative tendencies of the Spanish-American community in Florida, which is mostly made up of ardent Catholics and exiled Cubans. As a matter of fact, the Cuban community had voted for Mitt Romney as much as for Barack Obama in 2012; while there is currently a 38% gap between the two candidates, in favor of Donald Trump 4https://www.miamiherald.com/news/politics-government/article245495835.html. Let us not forget either that the Republicans won various local elections during the 2010s (for governor or senator seats) thanks to the support of central Florida’s Puerto Ricans and Miami-Dade’s Cubans.

Conversely, the Cuban Community was reluctant to align with the Republican Party in 2016, because its champion Marc Rubio had been beaten by Donald Trump during the primaries. In four years, the situation has evolved. Donald Trump has made the fight against socialism5A relatively vague term in the Trumpian vocabulary a personal cause, and has taken a firm stand against the socialist governments in Havana and Caracas. He is now raising the spectre of a socialist subversion of the Democrat Party by Bernie Sanders’s progressive forces, which catches the attention of exiled Colombians, Venezuelans and Nicaraguans. Lastly, he is the epitome of a caudillo, a strong omnipresent man towards whom local populations, torn between adherence and repulsion, have an ambiguous stance, as portrayed in South American history.

President Donald Trump can also rely on Governor Ron DeSantis, and both senators of the state who show him active support – as their seat is not up for grab this year, unlike many of their colleagues’. These powerful allies have already built their own electoral base and are ready to mobilize political and financial support. Finally, as years go by, the notorious Interstate 4 corridor, with its many swing counties, turns redder and redder, not unlike the counties of Polk or Volusia. The same goes for the counties of Pasco, Citrus, Hernando, Flagler and Bevard.

However, two new variables have come into play in the fragile equation of Latin-American voting. The first one is the refugees of hurricane Maria, which devastated the island of Puerto Rico in 2017 6This natural disaster caused the death of 3 000 inhabitants of the American possession, whose status is yet to be determined, who now live in Florida and are able to vote since they were granted American citizenship. Needless to say they are not overly fond of Donald Trump, who denied the published figures were true during the catastrophe. A second embarrassment for the Republican side: since January 8th 2019, former inmates – a population in which Black and Hispanic people are overrepresented – can vote in Florida, and are strongly aligned with the Democratic Party. These few thousand votes, which will probably be in favor of Joseph Biden, could thus cost the White House to the Grand Old Party.

Lastly, beyond the scope of the Spanish-American community, Donald Trump struggles to convince Florida electors of his ability to handle climate and ecological risks. The tropical storm Micheal left the state scarred, and the recent memorandum set by the White House on offshore extraction carries little weight compared to Joseph Biden’s genuine ecological commitment. In one of the American states the most exposed to climate risks , such a renouncement is likely to cost a lot to the outgoing president.

Another aspect of this electoral campaign in the Sunshine State is surprising, to say the least: Donald Trump’s official place of residence is in Florida. Perhaps for political or logistical reasons, in order to lead his campaign more easily in that state? Certainly, but that’s not all. The Trumps originally come from New York City, and that is where they have most of their business relationships. In 2016, Donald Trump was still a NYC resident. He fled Manhattan’s skyscrapers for Miami’s though, and for very particular reasons.

Only nine American states do not impose income taxes on their residents. Among them stands, sure enough, Florida. No income tax means no income tax return! And of course, more opacity on tax matters. Palm Beach coconuts are pretty much the same as the ones in the Bahamas, after all.

What’s left to be determined is the reaction of Florida inhabitants to a President who moves in their state to avoid setbacks with tax authorities. Let us recall that he is not the only one to do it: it is a well-known fact that the US Internal Revenue Service, which answers to the executive power, is strongly politicized, and not necessarily in the way Donald Trump would like…

Finally, the Floridian vote highlights several dimensions of American diplomacy that are forgotten much too often; especially the cultural and economic bridge forming rapidly between Washington DC and the capitals of Latin American countries 7Which seems genuine this time, and not simply a new embodiment of the Monroe doctrine, or the genuine motives for the American engagement and disengagement in the fight against global warming. Facing all these questions, will Florida be able to come to a decision ?