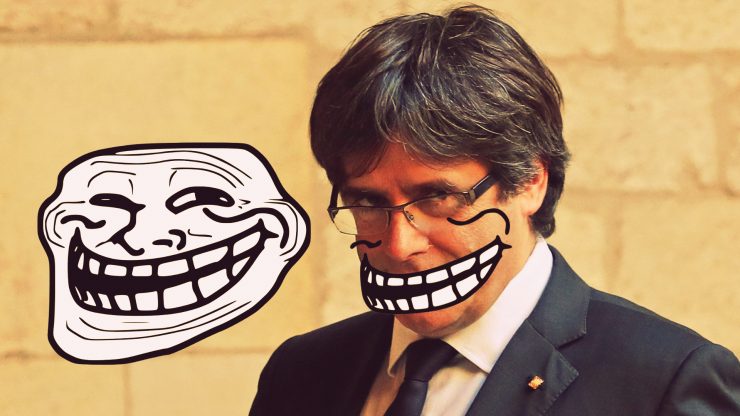 Catalonia: what if independence was nothing more than a pretext?

On the 1st of October, almost 90% of Catalans expressed their will to become independent. An event that surely shocked Europe. First because the Catalan people has shown it wanted to break away from Spain. Then, because the response of the Spanish state was full of violence, as the video footage of policemen in voting centers shows [1]. It is a shame not to let democracy express itself.

In fact, this is what the Catalan stance is all about. A stance which forgets to mention that voters were, in an outstanding majority, separatists (it is estimated that only 42% of Catalans are in favor of independence), which mainly explains the outcome of the referendum, with a stunning 90% of “Yes”. A stance which also omits to mention that the referendum is unconstitutional according to the principle of indivisibility of the Spanish homeland. Of course, it should not mitigate the atrocities committed by the police, as every form of violence should be contested and banished, no matter where it comes from.

Why did it end up like this ? Why did the relations between Barcelona and Madrid become, after 5 years of negotiations on the status of the region, so burning ? What if, in fact, independence was just a lure ? Nothing more than a pretext ?

Let’s get back to the basics

Everything started in 2006 when, under the pressure of independence supporters, Zapatero’s government (PSOE, Spanish Socialist Party, left wing), granted Catalonia the status of “nation inside Spain”. Everything could have been better back then. But the PP (Popular Party, right wing) refused such a decision, and obtained from the Constitutional Court the right to cancel it and, by the way, to delete the status of Catalan as “preferential tongue” in the administration of the Generalitat. Catalonia was set on fire because Madrid had affected its own identity as a people. Last summer, Pedro Sánchez tried to take advantage of this hype by proposing to include in the Constitution a clause which would acknowledge the “plurinational character” of the Spanish nation, as in Bolivia for instance [2].

A story of identity…

Separatist speeches are trying to benefit from a truncated cultural and historical reality. First, the strategy consists in putting everything that makes the region so special in the spotlight, starting with its glorious past. In the 13th century, when Catalonia used to be part of the Crown of Aragon, the region’s boundaries stretched all way to Corsica and Sardinia, and even encompassed some areas of Italy. Catalan was a lingua franca, and the nation was powerful, prosperous, and proud.

But the storytelling does not end here, it continues with the oppression Catalans underwent with the war for the throne of Spain between the Habsburgs and Louis XIV, then with the occupation of Napoleon’s troops, a form of military oppression that, as time went on, has changed into fiscal oppression from Madrid. The storytelling continues on with the Renaixença, a period of the 19th century when the Catalans intended to rediscover the origins of their tongue and the specificity of their forgotten culture, and organized huge artistic festivals to celebrate nationhood. If their national narrative is indeed based on real historical facts, it is of course distorted, changed and accentuated by fictional interpretations and definitely warped by inconsistent connections between past and present.

The aforementioned connections are often a bit of a historical leap. But Catalonia isn’t afraid of taking that leap. According to the separatists, all these historical facts show how specific the region is and how glorious the Catalan people used to be. Catalonia’s quest for independence is above all a quest for identity. But frankly… would a whole region be ready to break away on the mere basis of identity, language and culture? Although identity is a fashionable topic and deserves some discussion in a globalized, multicultural world, there is another topic that never went out of fashion: money.

The crux of all these tensions might not be identity, but money, and, more precisely, the Spanish tax system. In 2012, Artur Mas, the President of Catalonia, negotiated with Mariano Rajoy to rewrite the tax agreements between Madrid and Barcelona. Catalans find the loss they undergo in the regional redistribution system outrageous. Indeed, the state, in order to make up for inequalities between the richest regions (Catalonia, País Vasco, Madrid, Comunidad Valenciana, etc.) and the poorest (Extremadura, Castilla La Mancha), takes money from each region, with different amounts depending on the wealth of each, in order to redistribute it to other regions, depending on their needs. The system is based on interregional solidarity in order to bridge the gap of inequalities between autonomous regions. At the end of the day, each region gets a more or less substantial amount of money.

But Catalonia believes it does not receive enough, and most importantly, that it gives too much. Producing 20% of the Spanish GDP, the region supposedly loses 8% of its regional GDP–according to separatists– in this tax mishmash, which miraculously matches its public deficit. In fact, Catalonia does not want to partake in such a scheme, in which everyone contributes.

Everyone, except the Basque Country. For historical reasons, the region has specific tax laws, called “los fueros” (by the way, the motto of the region is, “God and los fueros”), so the general interregional tax system doesn’t apply. Its not-so-far neighbour, Catalonia, the only other region of the country to become industrialized in the 19th century, is now jealous of such a privilege, and wants the pact with Madrid to be renegotiated. But Mariano Rajoy strongly refuses. The only solution separatists have come up with is to shake things up in a country hardly recovering from the crisis by organizing riots, strikes and even, illegal referendums. And all of that in the name of “democracy” and “identity”… It might be democratic, but it is unconstitutional. Sorry Pep… [3]

Independence is a nasty nightmare. Beware not to wake up too late.

But let’s suppose for a moment that independence were proclaimed, albeit fundamentally unconstitutional. Spain would lose 20% of its GDP, 20% of its exports and a huge amount of tax revenue. But would Spain be the biggest loser? 35% of Catalan companies export goods and services, most of them to countries within the EU. Leaving Spain means leaving the EU, which means leaving the single market and, as a consequence, paying taxes on every product exported. Moreover, in order to join back the EU, Catalonia would have to respect economic criteria (with an 8% public deficit, hard to believe it’s possible, considering that leaving Spain would further harm the region). But most importantly, Catalonia would need to have the agreement of all other 28 countries, including… Spain.

Without even considering all the challenges Catalonia would face (who will defend the country, if it has no army? who will invest in an unstable region? which currency will be used in this new country? where will the Barça play?), becoming independent doesn’t seem realistic at all. The only thing which seems realistic is getting a new tax system, or a clause in the Constitution which acknowledges the plurinational character of the state. But all those efforts for so little in return? Really?

Would independence be harmful ? To Spain, probably. To Catalonia, certainly.

For quite some time now, Catalonia has wanted to get its money back, and it hopes it will take advantage of the current situation in Spain. Honestly, how not to believe that the leaders of the separatist movement do not have the word “money” in mind instead of “identity” ? How not to think that they all know what could be the consequences of an independent Catalonia ? After all, independence may be nothing more than a pretext.

French student in Master in Management at HEC Paris.
Writes regularly for KIP.