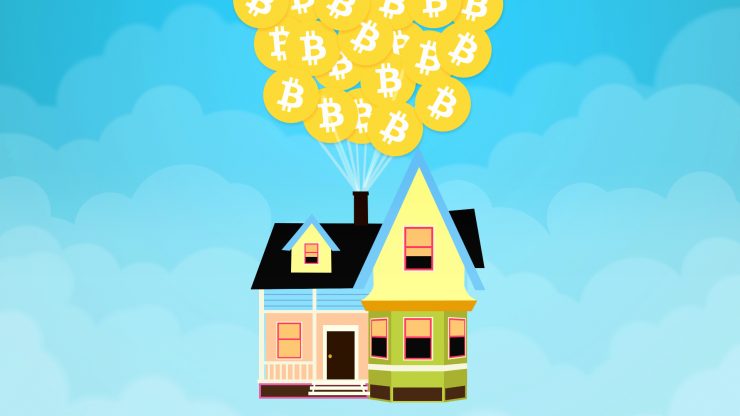 Bitcoin: the sky is the limit

Soaring to new heights above $10,000, Bitcoin embodies the seemingly unstoppable trend of emerging decentralised cryptocurrencies that offer an alternative to central-bank-controlled classic currencies. Their value, not backed by any commodity or governing body, rests solely on their independence to asset freezes or inflation (which illustrates the broader trend of money devaluation initiated with the end of the gold-standard). Yet, Bitcoin’s incredibly sharp increase in value rises a fundamental question: a growing number of prominent people indeed assert that a major bubble is building up.

How do Bitcoin transactions work?

The fundamental innovation supporting cryptocurrencies is block chain, which already existed prior to Bitcoin and has other uses. Blockchain acts as a decentralised (i.e. without any governing body overseeing the process) ledger for all Bitcoin transactions. Transactions occur at a peer-to-peer level (i.e. without any intermediary) between users that can choose to remain anonymous. Accounts are identified through digital wallets: one person can have several wallets, while a group of people may share a common wallet. Every block within the chain is secured through cryptography, records all Bitcoin transactions that take place during a given period and is linked to the previous and next blocks. Any user’s Bitcoin portfolio is thus stored on the blockchain, which provides the proof of the amount of Bitcoins possessed by a user at a given time as the result of all previous transactions.

Accordingly, tampering with the blockchain to directly steal Bitcoins is virtually impossible, since one would have to modify not only one block (to erase a transaction or add a new one), but all the other ones. Fraud in the case of Bitcoin consists mainly in wallet hacks, i.e. taking control of an account by stealing the access code contained in the wallet. This should however not be regarded as a major issue. Not only is such fraud far from limited to Bitcoin, but effective solutions are already being implemented. Users are increasingly resorting to cold storage, keeping their wallets offline (on USB-keys or even in Swiss vaults) to prevent them from being hacked. Blockchain also solves a problem that has long undermined all digital transactions: double-spending -a fraudulent scheme enabling someone to spend the same money twice. To be considered valid, a transaction has to be added into a new block, along with all the transactions occurring at the same period, which will enable the people expanding the blockchain -miners- to check whether the same money has been spent more than once.

As a result, blockchain ensures a higher storage safety and transaction transparency than for other currencies; the soaring value of Bitcoin rests mainly on this competitive advantage. However, this does not come without drawbacks: validating a transaction requires enough time for a new block to be added (about 10 minutes), impeding the speed of Bitcoin transactions.

The people expanding the blockchain are called miners: they aggregate all the transactions that have occurred since the last block was added (i.e. in the previous ten minutes) into a new block, which is then added to the blockchain. As such, the main challenge regarding mining is to ensure that the new block does indeed record all existing transactions without leaving any out. The blockchain uses a Proof of Work system to ensure that a sufficient amount of processing power (and hence time, amounting to approximately ten minutes) was dedicated to compiling the transactions into a new block. The Proof of Work actually preceded the creation of Bitcoin and has successfully survived the test of time by preventing spam abuse or DoS cyberattacks [1]. Let us try to have a quick overview of how the method functions: A target value (a number measuring the mining difficulty) is set for a given block. The miners have to insert a piece of data called nonce that will randomly generate a number called hash. In turn, the hash which has to be inferior to the target value for the Proof of Work to be solved. As it is (currently) impossible to predict into what hash a given nonce will translate, this ensures that the information contained in the new block is reliable enough.

Once exactly 2016 new blocks have been added, the target value is automatically reset to a new value that corresponds to the difficulty that would have been required for the previous 2016 blocks to be mined in exactly two weeks (i.e. precisely 10 minutes per block). Accordingly, without any external intervention, the blockchain is automatically set to keep up with the progress of technology, ensuring that mining difficulty grows at the same rate as computing power. Thereby, the mechanism prevents the blockchain from being overwhelmed by increasingly potent computers that would render its security obsolete.

Several teams of miners may be trying to simultaneously create a new block. In the end, only the largest one (i.e. recording the largest number of transactions and details on previous transactions) is added to the blockchain, which makes it more difficult to tamper with as it expands. Those that mined (designed) the block, reap all the rewards: a transaction fee and a bounty in Bitcoins, which is halved every 210,000 transactions. As the block creation rate remains stable at around 10 minutes, we can predict that the Bitcoin supply will peak in 2140. Accordingly, the founder(s) of Bitcoin have implemented a self-regulating limited-supply system: when demand rises, a sharp appreciation of Bitcoin will be noticed (as supply does not increase) and Bitcoin owners can rest assured that their assets will not be diluted by inflation.

On this matter, as odd as it may at first seem, a parallel may be drawn with gold, whose supply is also limited and whose scarcity increases over time. Both gold and Bitcoin are immune to central bank policies and are thus share many common proponents. As a prominent Bitcoin investor has put it, gold may well be Bitcoin without the Internet.

Perspectives for Bitcoin and other cryptocurrencies

In the infant stages of Bitcoin, any individual with a PC was able to directly mine. However, with the rising difficulty, mining has evolved into a specific -currently start-up dominated- industry, providing hardware (start-ups such as Avalon), cloud mining contracts enabling customers to purchase computing power, mining pools to share computing power etc. The rise of Bitcoin has entailed a growing ecosystem of start-ups that operate not only in mining, but also provide more secure wallets or trading platforms for Bitcoin: Spectro Coin, Kraken… Most of these companies, however, are nascent and some of them are still deemed unreliable.

As mining ultimately boils down to computing power, it remains uncertain whether individuals and start-ups will keep dominating the activity, since a large firm or state with higher computing power could effectively take control of the block creation process or of another step of the mining and transaction process, thereby jeopardising the decentralisation upon which Bitcoin and its reliability rests.

Even though Bitcoin is currently hovering high above all the other cryptocurrencies [2], they all remain very recent systems. While all are supported by the same technology (Blockchain), they stand out through specific transaction rules, supply increase mechanisms and other factors, which could eventually prove decisive. What is more, new cryptocurrencies keep emerging on a regular basis. In August 2017 for instance, a small portion of the Bitcoin miners, calling for more software updates, broke away by creating a new currency, Bitcoin cash (BCH). This was called the hard fork. BCH emerged from the same ledger (i.e. the same blockchain) as Bitcoin, with Bitcoin owners being given the same amount of BCH tokens. Although BCH did not stop the rise of Bitcoin, new cryptocurrencies are set to emerge. As such, Bitcoin’s remaining the dominant cryptocurrency is all but a foregone conclusion.

Such a scenario, however, assumes that cryptocurrencies will eschew clamp-down attempts by states. It may be helpful to remember that many of the earliest and staunchest proponents of cryptocurrencies are libertarians eager to avoid central banks that leave them prone to the adverse effects of monetary intervention. As such, it is difficult to imagine states and central banks accepting to relinquish one of their most powerful leverage tools on the economy, even though cryptocurrencies are still a marginal means of exchange. According to the Cambridge University, there are currently 3 to 6 million wallets, including some large firms such as Dell, Microsoft and PayPal. What is more, a decentralised system with anonymous wallets represents a boon to any criminal activity, as individuals cannot be tracked and their assets cannot be seized by any country. For instance, hackers now increasingly demand ransoms in Bitcoins. This could provide states with a convenient justification to lead a full-scale clamp down on decentralised cryptocurrencies, while developing their own, state-controlled virtual currencies -with the Bank of England currently experimenting one. Such a process has already begun in authoritarian regimes, with Bitcoin already banned from the financial sector in China and Russia drafting a bill to ban its use). Other nations could follow. Jamie Dimon, CEO of JP Morgan Chase, stresses that government regulation will be the downfall of Bitcoin, and vocally predicts that a giant bubble is building up around Bitcoin.

As such, Bitcoin and cryptocurrencies may well have the potential to disrupt the economy. It should be emphasized that Bitcoin mainly aggregated pre-existing technologies (Blockchain, Proof of Work…) to allow for safer storage and transactions, sheltered from central-bank-induced inflation. Sometimes combining existing technologies at the right time is all one needs to revamp the whole economic system, as Gutenberg did with the printing press in 1450. Yet, however widespread cryptocurrencies may become in the future, a sharp clampdown led by states and central banks is not unlikely. In the end, Blockchain appears as the truly disruptive technology that will actually have much wider effects, especially with the rise of decentralised systems. On this point, Bitcoin proponents and its opponents (the likes of Dimon) agree.

Illustration: Montage made by Hugo Sallé for KIP

Sources and footnotes
[1] Denial of Service, consisting in swamping a server with requests to cripple its ability to function.
[2] The second highest, Etherum, ETH, currently stands at $470.