Athletics: The World Championships which, unfortunately, kept all its promises

The World Championships is a major event of the track and field season, yet this year’s was terrible. Doubts had been raised ever since Qatar was chosen to host the games. Almost every criticism made of the Qatari project has proven to be right: the scorching heat, the empty stands, the threat of event cancellations… Let’s come back to the 2019 IAAF World Athletics Championships.

A fiasco on the tracks…

41% of female marathon runners were forced to withdraw from the women’s long-distance race, considered as a showpiece event. That is 28 out of 68 athletes. This lamentable statistics is indicative of the ordeal athletes went through during the World Championships. The events held at the Khalifa Stadium were less affected by the intense heat than the ones in the heart of Doha that took place under infernal conditions, even dangerous for the athletes. Humidity rates surpassed all expectations (more than 80%) and the temperature often exceeded 40°C (100°F). Spectators could barely walk along the streets of Doha. No wonder athletes, who need to make tremendous efforts when running, struggled to cope with these conditions… Yet still!

Qatari organisers had promised acceptable climatic conditions as the competition was postponed until September instead of August, when it is traditionally held. Yet, the weather was still inadequate for high-level sports performance. A couple of days before the games kicked off, the International Federation even mentioned the idea of cancelling the marathons and the 50km race walk on account of the weather conditions, which would have been the first time in the whole history of Athletics. “We knew it wouldn’t be 20°C (70°F) right from the beginning, when they chose Doha to host the games. Everybody knows it’s a real scorcher at this period of the year. It’s nothing new. You don’t just realise it three days before the event kicks off, that’s just complete nonsense,” said Yohann Diniz, the three-time European champion and the World champion of the 50km walking race. In the same spirit was the declaration of Kevin Mayer, the World decathlon record-holder: “Clearly by organising the championship here, they didn’t put the athletes first, they’ve mostly put them in jeopardy. Now, it’s up to us to not act like princesses and to get on with it anyway but for sure, we’re not at all in the right conditions to perform.” The weather was so appalling that athletes might have been better off not competing in the championships at all. But was it really possible to call off the event three days before kick-off, when athletes had been training for it for several years? Most certainly not. How is it that no one thought of shelving the games earlier? Is it acceptable that the IAAF should be confronted with a problem like this in the days leading up to the start of the games and endanger the athletes? The organisers’ responsibility is undeniable. The very cause behind all this is the Qataris’ desperate efforts to save face, and it is unacceptable that this should take precedence over the athletes’ safety and the decision of the federation.

…. And outside the world of sports

The success of the Championships off the tracks was far from brilliant too: Qatari organisers failed to draw spectators to the games. First of all, the occupancy rate of the Khalifa Stadium, the central place of the World Championships, barely reached 20%. During the flagship event of the games, the men’s 100m race, the attendance rate (around 8000) was far below the whopping 48,000 available seats in the arena. How could spectators not be shocked by the thousands of empty seats they could see on television and by the third level of the stadium conspicuously covered with tarpaulin, when the event was supposed to attract people from all around the world? Feeble attendance even caused a medal ceremony to be put off, despite featuring Mutaz Barshim, a Qatari runner. What’s more, to boost sales the ticket price gradually slid down to €15 (£13, $16), a ridiculous price relative to the alleged scale of the event.

The Qataris then tried to save face. First, they tried giving reasons for low attendance by referring to the “late schedule imposed by television.” With races starting at 5pm (local time), it seemed to be quite a fair point. However, they went on and shamelessly put out a statement with false attendance rates, reportedly around 70% on September 27th – which fooled no one. The coup de grâce came on the 4th day of competition when the Khalifa Stadium was nearly full, while the Organisation Committee had acknowledged low attendance the day before. The occupancy rate reached 70% and dozens of groups of young people dressed in the colours of Qatar were shown on TV. They were not athletic fans, of course, but students, servicemen and immigrant workers that had been “kindly” asked to come. If the objective was to prove observers’ concerns wrong, this crude act of manipulation only made to ridicule an overwhelmed host nation.

Besides poor local attendance, TV audience was also representative of the viewers’ weaker-than-usual interest for the games. International audience during the men’s 100m race was 2.4 million viewers, compared to an average of 2.8 million French viewers during the 2017 London games! France Télévision, a French TV broadcaster, barely attracted 1.8 million people and ranked a disappointing 4th in French audience ratings. Although you could explain this away by saying the games were held late and were thus aired at more competitive time slots than in the middle of summer, it just doesn’t suffice. Many fans were simply put off watching the games because of how disappointing they were.

With the World Championships, Qatar intended to give its soft power a new dimension by betting on sports. Since the 1990’s, Qatar has progressively put sports at the heart of its strategy of global influence by hosting several medium-scale sporting events, like Doha ATP 250 since 1993 or the Doha Diamond League, an international athletic meeting that has taken place every year since 1997; and by investing in professional clubs such as Paris Saint-Germain F.C.. But it is only recently that the Gulf State began to host major events. If the Handball World Championships could have surely taken place in the country of Emir Al Thani, these  World Championships, with wider media coverage, should have impressed international viewers.

But, the games will leave deeper traces than this organisational failure. Far from showing Qatar as a country now fully involved in the sports world, the Championships have reinforced the image of a country that is trying desperately to buy its way inside a world filled with passionate fans and athletes, by splashing out on gigantic, big-budget events. And that is not to everyone’s liking, at all. To be honest, watching the games was no pleasure cruise. The athletes looked trapped in a competition they could not afford to fail, surrounded by an atmosphere and a country that were diametrically opposed to what the sport usually stands for. Giving priority to the economic impact of the games and the reinforcement of Qatar’s soft power without taking into consideration the passion that drives sportsmen and women and the smooth running of the events cannot give rise to the magic of the sport. And it’s not Kevin Mayer who’ll say otherwise: “It’s sad. We have to leave room for reason and concentrate more on passion, because if not, I would have boycotted these Championships.”

Almost three years before the Football World Cup, Qatar has once again come under fire and will have to come convincing for this long-awaited event. Qatar is already lambasted for the appalling working conditions the workers who built the stadiums had to put up with and it’s now under even more pressure. Jean-François Debat, the mayor of Bourg-en-Bresse, a French town, and Régis Juanico, the deputy for the First Constituency of the Loire, a French department, even called for a boycott of the competition. This is symptomatic of the increasing distrust of the Gulf State. If Qatar doesn’t want to scupper the Football World Cup, the most followed sports event after the Olympic Games, 3 years from now, it will have to learn from the massive failure of the Athletic Championships. Admittedly, temperatures will certainly be lower – the World Cup takes place in November and December – but organisers will still be hard-pressed to solve the low attendance problem, for sure. It won’t be possible to transform Qatar into a football nation, even though Qatari clubs are trying to create a positive dynamic by attracting big names like Xavi Hernandez, a World Champion who now works as a coach for the Al Saad team. The upper echelons made up of the country leaders play a vital role in Qatar football; but actual players and fans unfortunately don’t. If the Qatari want their World Cup to be a hit, they will have to make their football something more than a mere, empty symbol, and include the people in the project, and not like what was done in the Athletic Games. No matter how powerful money may be, it can’t buy the passion of supporters. That’s why I hope I will be surprised in three years time; but I’m cautiously optimistic for the next World Cup.

It remains to be seen whether the warning of the World Athletics Championships will be taken seriously by the decision makers of the sports world and that it will prompt them to find a miracle solution.  But as long as the very essence of the sport itself is not sacrificed: passion. 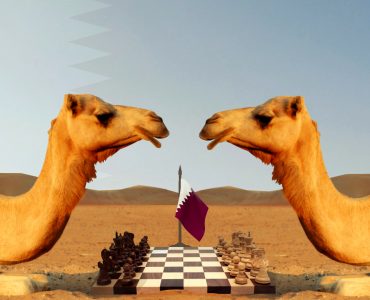