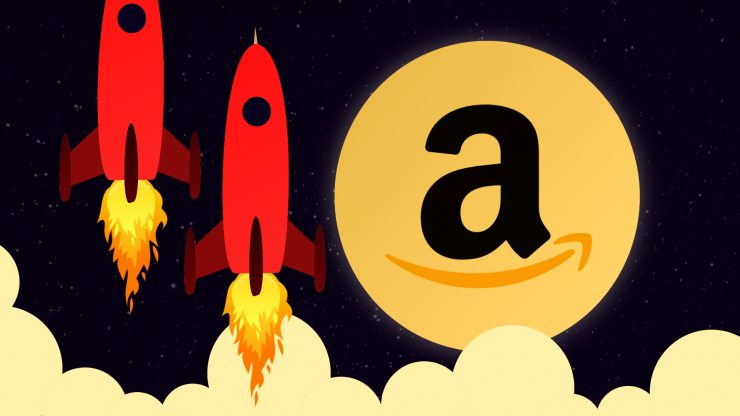 Amazing Amazon: can P/E ratios grow to the sky?

Amazon regularly catches everyone by surprise when it announces it is launching a new farfetched or futuristic innovation, be it delivery drones or self-service shops. This makes for a bizarre company, with a foot in the most diverse activities. So, when it comes to Amazon and its share value, markets also seem somewhat puzzled.

P/E ratio is found by dividing the share price of a company by its earnings over the year. P/E ratio is crucial to let investors know in one quick glance if a company is properly valued with regards to its actual results. To that extent, Amazon (ticker symbol AMZN) is a market anomaly. While other companies in the same sector (online retail) keep to an average of 91.27 in 2016 (the P/E ratio is rather volatile, it was only of 58.54 in 2015), Amazon requires using a whole other scale: in 2016, its P/E ratio climbed at 172.4 with an average over 5 years reaching an insane 706.6 mark. However, it may be more relevant to compare Amazon with other GAFAs (Google Apple Facebook Amazon): in which case, Apple reached a modest 18.5 in 2016; the same year Google hovered at 37.6. Alibaba, the Chinese online retail giant, working in the exact same field as Amazon, never went past 60 [1].

Paying closer attention to past trends in Amazon’s share price, it appears that it was between April and September 2011 that the infamous ratio overshot the 100 threshold (which it exceeds since then, at least in absolute value: indeed in 2015 Amazon’s P/E was even below -100, since the company made losses).

Amazon Fundamentals, according to Macrotrends 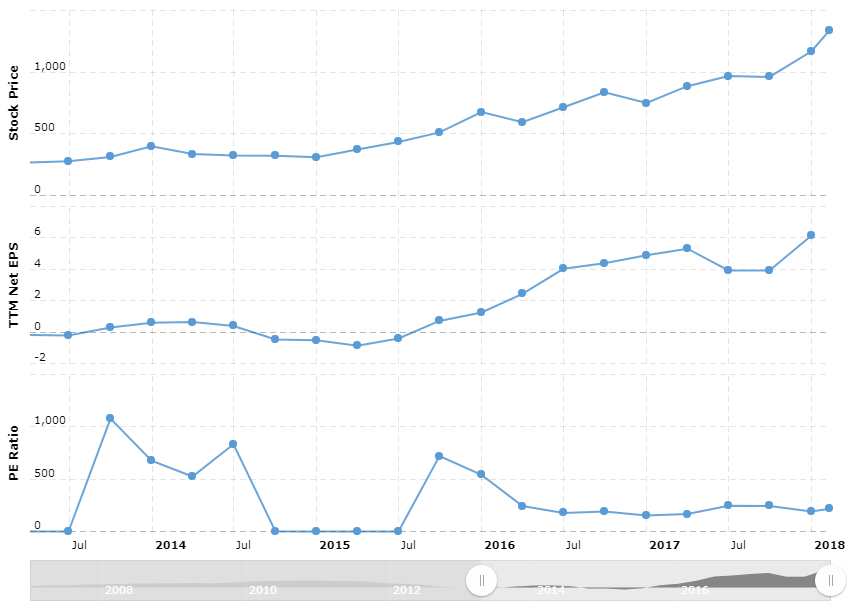 Why can we say such a ratio is madness? because it means it would take the same number of years (a sheer 300 years considering Amazon’s current price) for the company’s profits to pay back the cost of having bought a share, and that only if profits were entirely paid out as dividends. Considering simply the dividends one can reasonably hope for, any ratio above 40 more or less is absurd. What then of Amazon’s P/E ratio?

Enough with the P/E ratio

The P/E ratio is perhaps a questionable indicator to decide if a company is adequately priced by the market.

To start with, P/E ratios only consider a company’s past profits, without taking into account its growth potential. Meanwhile, it might be more relevant to compare Amazon with other major technological companies: Amazon’s situation as a platform for a two-faced market or its client profiling expertise (its data collection and analysis skills) are much more valuable than its margins. Investors are expecting (but they have been left waiting for a decade already) gigantic future profits, comparable to those of Apple after its business really took off in the noughties. This conjecture isn’t entirely make-believe since Amazon’s growth rate is indeed insane: between 2012 and 2016, the company’s sales more than doubled, from 61 billion to a lofty 136 billion US dollars. It was a deliberate decision on the part of Amazon to favour growth over profitability.

So how does Amazon, a giant multinational company, end up with such disappointing profits, which distort its P/E ratio?

Jeff Bezos’s company’s strategy is to reinvest massively its operating profit, cutting on its net result. As a result, over the course of 20 years, Amazon has almost never made a profit as margins are directly reinvested [2]. In addition, contrary to Apple which sells very expensive products, with a high margin, Amazon has put in place an aggressive dumping strategy to kill any competition. The firm is bent on completely ruling over online retail. It has at least partially succeeded since the company currently controls 44% of the sector.

Nevertheless, outside its usual field of operation, Amazon dares to try out all kinds of innovations, for the better and the worst. Remember Amazon’s smartphone? No one does, indeed the “Fire Phone”, launched in June 2014, was a spectacular failure. It stopped selling after inventories were cleared, about a year after initial launch; it cost Amazon about 170 million US dollars. Another example: Amazon had invented its own search engine, Askville. Despite multiple reboots, it closed down in 2013 after 7 years of existence. For the sake of completeness, The Verge lists most of Amazon’s failed concepts [3].

Even if it means ending in a major fiasco, Amazon always gives new products a try, in the hope that it would finally find the goose that lays the golden eggs. Jeff Bezos can launch 10 different products, of which 9 fail miserably and cost 100 million each along the way, if the tenth succeeds and brings in a 10 billion profit. If the Amazon Music Importer, the online clothes shopping website Endless or the Amazon Wallet are long forgotten, the Kindle was undeniably a massive success.

Amazon doesn’t mind blowing away its profit (and thus giving away its shareholders’ income) in order to stay ahead of the race. The firm is definitely on a Research and Development splurge: according to consultant PriceWaterhouseCoopers, in 2017 Amazon invested 16.1 billion dollars, that is to say nearly 12% of its turnover, thus becoming the biggest investor worldwide. If Amazon earmarks so much of its income for investment, it is that it hopes to become the supermarket for everything, a shop for just about anything you can think of, from clothes, to movies, books, everyday supplies, etc

Pick up your calculator

Taking into account this lavish R&D spending, Amazon’s share price seems much more reasonable. Nelson Smith on website “InvestorPlace” roughly estimates what would be Amazon’s P/E ratio if one were to plug back in the amounts spent on R&D: in the first semester of 2017, Amazon announced an operating profit of 575 million US dollars, add to that 4.14 billion in R&D and you get a P/E ratio of approximately 21, more in line with usual P/E ratio levels [4]. Amazon’s shareholders most likely do the same math: they anticipate that as soon as Amazon reverts to a more normal investment pattern, most likely once it has achieved total control over online retail, its P/E ratio will come back to earth and they’ll have their money back.

As a result, markets pay closer attention to Amazon’s sales rather than to its profits, which are distorted by this abnormal level of R&D investment. In the technology sector, it is not unusual to look at the price/sales ratio rather than the P/E. As a matter of fact, since 2005, Amazon’s P/S ratio stayed in a much more reasonable range, and is a lot more stable than its P/E ratio (it fluctuated between 1.2 and 3.4) [5]. But if Amazon’s market price isn’t totally irrational, shareholders might one day grow tired of mere promises of future gains…

Illustration: Made by Hugo Sallé for KIP

Credit to Mrs. Tang for pointing out the anomaly. 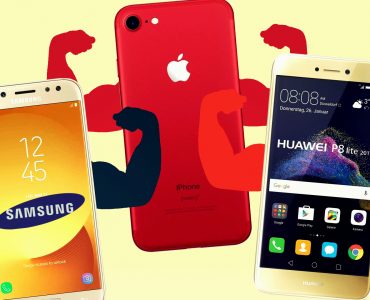 Apple, Samsung and Huawei: clash of the titans